The Polish, Romanian, Hungarian, Czech and Lithuanian road carries – call for the verification of regulations concerning the German minimum wage with respect to drivers performing cross-border, transit or cabotage carriers in Germany. The joint petition states that “the inclusion of the drivers employed in companies in our countries into the MiLog provisions violates the sense of sovereignty. When our countries joined the European Union, we were happy with the perspectives of the free movement of goods and services. We greeted the German investments in our countries with understanding, and we, ourselves, had taken difficulty and risks of competing for strong position in the common market. MiLoG (and the planned Loi Macron) is a blow to the fundamental European Values. It breaks the long-term cooperative relation with the German partners, it increases the costs of trade, especially between German and the Eastof Europe, it imposes on us undue administrative burdens, the obligation to keep records of our companies in a foreign language and the obligation to be subject to the control of authorities of a foreign state – at home. The European Union  had been created as a community of economic interests, in which every state sacrificed some part of its  own benefits for the construction of the common good. MiLoG as regards its current scope of application – is a step in the opposite direction, is an attempt of imposing own particular interests to others. Germany is convinced that acts in line with the European law, we seriously doubt this and fear that its flagship step will have unpredictable impact on the EU road transport market.

Our carriers are deeply disappointed by the introduction of new protectionist provisions. We imagine the freedom of conducting business in Europe differently. After the enlargement of the European Union we have been working together hard for many years. We have been building together our common welfare and we have been teaching each other respect, despite the fact that our economic position was and is weaker. May be there will come the time when we equal salaries of our employees. It will be a reason to celebrate together.The salaries must however result from our real possibilities and our market decisions, and not from the expectations of governments of other states. Using cheaper labour (compared to which wage level?) why would create “unfair” competition? – as we often hear in the increasingly blurred discussion in the EU on the so called ,,social dumping” and its impact on the fair competitive environment. Legal competition which is a single market principle cannot be questioned and should not be downgraded as a simple act of “social dumping”. We believe that facilitation of road freight transport in the EU single market –   through the increase of efficiency – contributes to the rise in living standard and to the improvement of the competitiveness of the whole  EU therefore our organizations would like to see further liberalization instead of new market barriers. We call the European Parliament to base the professional discussions on market economy arguments, to stop breaking the EU internal market, to prevent 28 different minimum wages!”

Mr. Radu Dinescu – Secretary General UNTRR – handed to Mr. Istvan Újhelyi – Vice-Chair, Transport and Tourism Committee, European Parliament, the joint petition in front of the protesters. Mr. Istvan Ujhelyi presented the petition and the associations’ protest during the European Parliament plenary session discussing about protectionism in EU – minimum rates of pay in the transport sector, including a Commission statement on compliance of the German provisions with European law on the minimum wage in the transport sector.

We call the European Parliament to stop MiLoG!

If in the EU the rules are made by European Commission and European Parliament, and not by German BUNDESTAG, than MILOG should be suspended until clarification of the issue at EU level.

We ask European Commission and European Parliament to cancel MILOG provisions for road transport companies established in other countries than Germany! 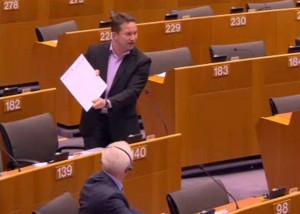 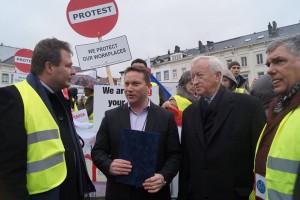 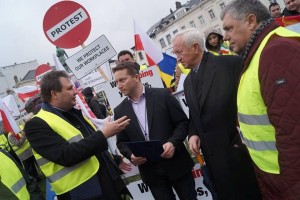