Transport: Commission launches infringement case on the application of the German Minimum Wage law to the transport sector

The European Commission decided today to launch an infringement procedure against Germany, concerning the application of the Minimum Wage Act to the transport sector. Following an exchange of information with the German authorities and a thorough legal assessment of the German measures, the Commission has sent a Letter of Formal Notice to Germany. This constitutes the first step in the infringement procedure.

Whilst fully supporting the introduction of a minimum wage in Germany, the Commission considers that the application of the Minimum Wage Act to all transport operations which touch German territory restricts the freedom to provide services and the free movement of goods in a disproportionate manner.

In particular, the application of German measures to transit and certain international transport operations can in the Commission’s view not be justified, as it creates disproportionate administrative barriers which prevent the internal market from functioning properly. The Commission considers that more proportionate measures are available to safeguard the social protection of workers and to ensure fair competition, whilst allowing for free movement of services and goods.

What are the next steps: The German authorities now have two months to respond to the arguments put forward by the Commission, in the letter of formal notice.

The Commission’s letter of formal notice only concerns the specific case of the German law and is without prejudice to further initiatives that the Commission may take to clarify the rules, for example in the context of the labour mobility package scheduled for adoption later this year.

The Commission supports the introduction of minimum wage in Germany, which is in line with the social policy commitment of this Commission. However, as Guardian of the Treaties, the Commission must also ensure that the application of the national measures is fully compatible with EU law, notably the posting of workers directive (Directive 96/71/EC), transport acquis and the Treaty principle of freedom to provide services, the free movement of goods, and having regard to the principle of proportionality.

Germany is the 22nd country in the EU which introduced a minimum wage. The law entered into force on 1 January 2015. The German minimum wage is set at €8.50 per hour. The law also applies to companies outside of Germany which provide services in Germany. Companies outside Germany in certain sectors, including transport are obliged to notify the German customs authorities via specific forms provided by the German authorities. The German customs authorities are competent for controlling the execution of such notifications. Penalties for a breach of these notification obligations can be as high as €30 000, and €500 000 in case where the remuneration paid does not comply with the German law.

On behalf of the National Union of Road Hauliers from Romania (UNTRR), employers and professional organization that promotes and protects the interests of national and international Romanian road transport operators freight and persons, we want to inform you on the abusevly provisions of the new law to regulate the minimum wage the economy in Germany (MiLoG), as it is imposed also to carriers from other Member States for any activity by their drivers in Germany. END_OF_DOCUMENT_TOKEN_TO_BE_REPLACED

ZMPD just informed us that a Polish company was controlled, receiving a request from the German Customs, which required the calculation of salary, working time schedule, confirmation of salary payment and the form A1/E101. Please see the document below. 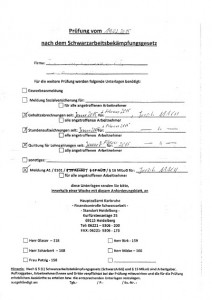 The European Parliament plenary session agenda, 25.03.2015 in Brussels, was on the minimum wage in the transport sector, in which were discussed:

Marita Ulvskog, member of the European Parliament – Employment and Social Relations Comitee (EMPL) has addressed an oral answer question to the European Commission (O-000019/2015), regarding the employment conditions, including the minimum wage levels, on the transport sector (2015/2571(RSP)) (B6-0106/2015). Marita Ulvskog (author) asked the question:

Most of the Member States have implemented minimum wage levels on all the sectors, including the transportation sector. These requirements are also implemented by some of the states for foreign transport companies regarding the minimum wage and administrative requirements (like the pre-authorisation) when these companies operate foreign transport procedures like transit, international operations or cabotage. This could result in barriers on the domestic market, influencing the free movement of the goods, services and workers.

The European Commissioner for Transport, Ms Violeta BULC, stated during the plenary session that the EC appreciates the setting of a minimum wage but still the EC did not yet reached a decision regarding the abiding of the EU law by the German law of the minimum wage, needing to continue the investigation and procedures.

The interventions of the European Parliament Members

David Casa, representing PPE Group, referred to the impact of MiLoG on the free movement of services in the EU, and to the wage differences in the EU as a result of the principle of alternate upon which every Member State sets the national wage level.

Jutta Steinruck, representing S&D Group, appreciates that the driver should follow the work law of the state he is making the transport in, as he should follow its driving rules. S&D Group wants to protect the workers against exploitation and “modern slavery” being against social dumping and disloyal competition.

Richard Sulík, representing ECR Group, appreciates that Germany is abusively imposing the minimum wage regulation upon the foreign drivers in order to shut its market. Considering the discriminatory character of this regulation, the EC must make Germany apply MiLoG domestically only.

Martina Dlabajová, representing ALDE Group, warned on the danger of a chain reaction after the German model, resulting a contradiction with the EU principles, and against the EU spirit. This is a political problem for the EU that must not take any step backwards. The ALDE member of the European Parliament, met with the representatives of the transporters protesting against MiLoG in front of the European Parliament, before this plenary session, showing that uncertainty is extremely negative for the business area and the transport companies have been struggling for three months with this, since the implementation of MiLoG. ALDE asks the EC for a firm stand and the publication of the German Government answers on the MiLoG issue.

Terry Reintke, representing Verts/ALE Group, appreciates that there is an unbalance between the EU unique market and the different social standards in the EU. The EC must come forth with a proposal able to secure decent work inside a social and fair Europe.

Laura Agea, representing EFDD Group, appreciates that EU is a team but does not follow the same rules. The reason for the social dumping is the lack of a homogeneous law in the EU and the proliferation of the domestic law. EFDD Group asks for the settlement of the market with specific European rules.

Vicky Maeijer, non-affiliated, appreciates that the problem is not the minimum wage but the burden of the specific administrative bureaucracy.

Marian-Jean Marinescu, Romanian Member of the European Parliament from the PPE Group and TRAN member, appreciates that the minimum wage applies to the citizens from that specific state and under no circumstance to the foreign workers. The imposing of the German minimum wage on the foreign drivers and the demand for the check documents, is obviously braking the unique market principles, thus being a dangerous precedent. The new regulations imposed by Germany are outside the European regulations and are followed by abnormal penalties, being obvious that these are protective measures. The Romanian member of the European Parliament asks EC to lunch the infringement procedures in this case.

Bogusław Liberadzki, S&D Group, answered a question asked accordingly to the “blue card” procedure, by István Ujhelyi, showing that the bus drivers are not moved workers in Germany and the EC must apply the existing law.

Next, the following Members of the European Parliament ruled against MiLoG:

The following Members of the European Parliament ruled for MiLoG

At the end of the debate, the Commissioner Violeta Bulc, has declared that the EC will take into consideration the worries and the problems raised by the Members of the European Parliament who emphasized on the necessity of the clarification of this situation as soon as possible. She also showed that the EC will prepare a new set of steps for the road transport by 2016 in order to secure the social proceedings and rules.
The debate ended